Prominent ears—ears that stick out too far from the head—are not only regarded as unattractive in most societies, but are one of the few facial features that becomes a target for teasing and ridicule (references may be made to the Disney® character "Dumbo," for example). For this reason, patients with prominent ears often seek correction of this deformity during childhood (ideally around age five or six), but patients of any age can be candidates for correction. A young woman, for example, may be self-conscious about her prominent ears and avoid wearing her hair up. Likewise, most men's hairstyles crop the hair close to the sides of the head, which can make prominent ears on a man all the more distracting.

Due to these issues as well as the minimal downtime and high success rate of surgery, satisfaction from surgical correction of prominent ears is among the highest of all cosmetic procedures. 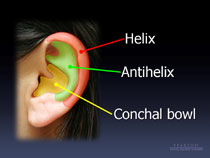 Usually prominent ears are an inherited deformity passed down from either maternal or paternal genes and occurs while the patient is still in the womb (typically between weeks twelve and sixteen of pregnancy). As a genetic trait, prominent ears are not the result of anything the patient or his/her parents did or did not do.  Most commonly, the ears take on the shape of so-called "cup ears" with a deep conchal bowl and an inadequately furled antihelix (see figure). Many other variations are possible to produce prominent ears, resulting in such descriptive terms as "lop ear", "shell ear", and "Stahl's ear", for example.

A careful assessment of a patient's ears usually reveals differences between the two, and any treatment will need to take these differences into account. At the consultation, these asymmetries will be pointed out, specific measurements may be made, and the specific nature of the deformity will be determined. Most importantly, your goals and motivations will be discussed, to gain a full understanding of your desired outcome and the realistic possibilities of surgery.

Surgery is currently the only technique known to adequately and permanently correct prominent ears. The procedure—referred to in lay terms as "pinning the ears" or having one's "ears pinned back"—is a bit of a misnomer. Technically, the surgery is broadly given the name "otoplasty," which literally means, "to reshape the ears." However, reshaping the ears is a highly customized procedure and your surgeon will likely select from a wide variety of techniques to reshape the skin and cartilage framework of the ear. In essence your surgeon will create a unique operation under the name "otoplasty" tailored to your specific anatomy and desires.

During the consultation the specifics of the custom procedure planned will be discussed in detail. As with any cosmetic surgery, it's important that patients thoroughly discuss specific concerns about their ears to make certain that the patient and physician to have a clear, mutual understanding of the intended result. Only then will Dr. Pearson be able to outline what can and cannot be achieved with the surgery.


The following is provided to answer questions relevant to most patients:
If Dr. Pearson feels that you are a good candidate for otoplasty and you feel that results he expects to achieve coincide with your desires, then several things need to be arranged for surgery. Pre-operative photographs, routine lab work, a physical exam and various paperwork need to be completed. A second visit is typically arranged shortly before your surgery date. This will allow you time to think over the many things discussed in your initial consultation, and it will allow you time to ask additional questions or address concerns.
Dr. Pearson performs most of his surgery at Fleming Island Surgery Center or Middleburg Surgery Center. Both are state-licensed outpatient surgical facilities fully accredited by the AAAHC (Accreditation Association for Ambulatory Health Care). Both locations are close to his office (and a conveniently short drive from Jacksonville, Florida). Both facilities offer excellent safety while also providing the privacy and convenience patients desire.
Because of the custom nature of the surgery, exact times cannot be given. On average, surgery may take one and a half to two and a half hours, depending on the specific steps your surgery requires. You will receive a better estimate during the consultation.
Otoplasty is usually performed on an outpatient basis for both adults and children. For children, otoplasty is performed under general anesthesia. Adults may choose between local anesthesia with sedation or general anesthesia.Improvement in the appearance of the ears is essentially immediate, however healing must obviously still take place, and a soft gauze head-wrap is applied at the end of the case to protect the ears. Pain after otoplasty is typically minimal, although the patient will be provided with pain medication if desired. Bruising is also usually minimal and should fade completely, or nearly so, by two weeks post-op. Although heavy lifting and strenuous activity should be avoided for a week, patients can resume their normal activities as soon after surgery as they feel able, and begin enjoying their new appearance.
Dr. Pearson will usually re-examine you in the clinic one to three days after surgery to remove the dressing. Based on recently published studies, we no longer require the prolonged use of a protective headband. Some patients, however, may find it more comfortable to wear a soft elastic headband (such as a sweatband or skiing headband) over the ears for a few days while sleeping. Any skin sutures are typically dissolvable and do not require removal.Dr. Pearson usually also likes to see patients six weeks, three months, and one year after surgery. These are at no charge to you, and more visits may be necessary. Yearly follow-up after the first year is welcome, but not essential.
When done solely to improve the appearance of the ears (i.e., a cosmetic otoplasty), the patient will is responsible for the entire cost of surgery. Exceptions may apply for pediatric patients. Check with your insurance carrier for a specific answer. Call us for more details.

Otoplasty can often go a long way in improving the appearance and self-confidence of a person born with protruding ears. For more information about otoplasty and cosmetic facial plastic surgery here in Orange Park and the greater Jacksonville, Florida area, please contact us or call (904) 215-7377 to schedule an appointment.
Photo Gallery